Posted on September 14, 2012 by thebestdressup

when i invited my friend, jim, to dinner, he did not show up empty handed!  instead of the usual flowers, as his hostess gift, he extended an invite to see Il Volo, in concert at The Fillmore Miami Beach at Jackie Gleason Theater.  i remembered my mother had mentioned their cd, and as well catching them on an italian channel, so their impressive voices straighaway came to mind.  IL VOLO, is a trio, of italian teenagers, Piero Barone (19), Ignazio Boschetto (18), and Gianluca Ginoble (17), that met three years ago in italy, in an italian singing competition.  they launched their career, singing the classic, o sole mio, and have become a sensational pop opera group.  il volo, means flight in italian, and they have taken off.  these three talented teenagers, have a platinum album in italy and have been nominated for two grammys.  Il Volo North American tour, is billed, il volo takes flight.  at the concert, they opened with the classic italian song, il mondo, and received the first of many standing ovations.  with their powerful vocals, this pop operatic trio, deliver a show stopping performance.  do take this flight.  il volo is a luvMUST for any music lover of any age.  flowers would have been appreciated, but IL VOLO, elevated the hostess gift.  oh, and the wine jim brought, a crisp, much sought after corton-charlemagne, sent me airborne.  IL VOLO; yes, this flight is for thebestdressup now! 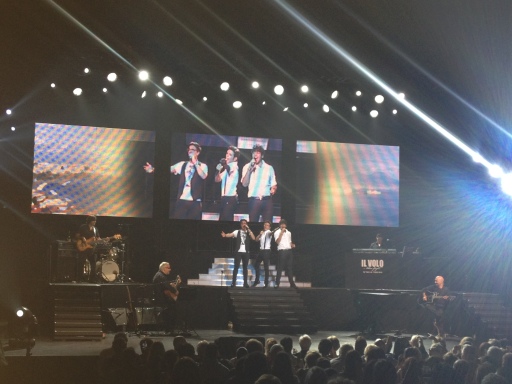 IL VOLO, in concert at The Fillmore Miami Beach at Jackie Gleason Theater, lifted the audiendce.  il mondo, ringing in my ears, a treat for thebestdressup now!

ciao! thebestdressup is about being the best now in anything/everything and anywhere/everywhere. can this be possible? i will give it a heart and put my heart into it. thebestdressup.com
View all posts by thebestdressup →
This entry was posted in luvMUST, MUSIC, PEOPLE, TRAVEL, WINE and tagged CORTON CHARLEMAGNE WINE, GIANLUCA GINOBLE, IGNAZIO BOSCHETTO, IL VOLO, MIAMI BEACH, NORTH AMERICAN TOUR IL VOLO TAKES FLIGHT, PIERO BARONE, THE FILLMORE MIAMIBEACH JACKIE GLEASON THEATRE. Bookmark the permalink.